Browse: Home / Why Franchises Fail & What to Do About It Part 2

Why Franchises Fail & What to Do About It Part 2

Experts agree: franchise failure is often the result of improper screening and qualification of franchisee candidates.

In Why Franchises Fail & What to Do About It Part 1, I posted a disturbing ode to franchise failure I discovered on Twitter.

The author, a print shop franchise owner named Jenny, posted 5 total Tweets.  In the first four Tweets, she revealed that she spends her days passively waiting for customers, gazing out the window, playing on the Internet… doing just about everything except marketing or any other activity that might bring her business.

In her last Tweet she angrily blamed her franchisor for her lack of success, and referred to her franchise agreement as “a deal with the devil.”

I invited readers and franchise industry experts to share their opinions on a situation that will inevitably lead to conflict and failure for both franchisee and franchisor.

The consensus is that this situation was (unfortunately) not all that uncommon, that the blame is shared by franchisee and franchisor, and that the situation could have been avoided with more honest and thorough due diligence by franchisee Jenny, and with more effective screening, stricter selectivity, better training, support and enforcement by the franchisor.

“We don’t sell franchises.  We Award them.”

Franchisors are fond of saying that they don’t “sell” franchises, they only “award” them to individuals having the attributes needed to be successful with their specific franchise concept.  Obviously, the only success criteria Jenny met was the “fog the mirror” test.

There are few businesses as fiercely competitive as the printing business.  Like other competitive businesses, print shop franchisees better have a penchant for – if not a love of – aggressive sales, marketing and customer engagement.  All of our contributors agree that Jenny is the wrong franchise owner for the challenges ahead.

Unreal. to sit in a B2B franchise store, and waaaait for business to come rolling in. Like the franchisor is going to just make that happen..
1. Shame on the franchisor for not digging deep enough, and at least doing some type of sales profiling tool.

2. Shame on the franchisee for not doing her due diligence. (Starting with what her skills are!)

This happens more than folks think.

…how does someone with this type of attitude even get a franchise? …franchising is a two way street and both parties should want to be on the road! 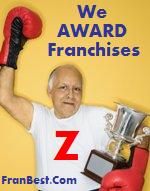 Some blamed the franchisor for simply selling a franchise to anyone who can meet the financial requirements – and not screening for the personal and professional attributes they know are needed for success.

This is a perfect example of a franchisor engaged in the practice of just selling franchises… this franchisor is simply collecting fees.

…there is no such thing as a good or bad franchisee. There are franchisees that match and those that mismatch with the business model.

Legitimate franchisors are the ones who carefully profile their existing franchisee population and using their own performance metrics create a standard for which all inbound candidates are measured to.

The others are probably going to go away and take many unfortunate people, such as Jenny, with them.

Robert Bilotti, Managing Director at Novita New Employee & Franchise Training agrees, but also adds that Jenny may have simply interviewed well, and that the franchisor lacked the tools to test on a deeper level. writes:

This is more than likely a case of a franchisor simply seeing dollar signs and taking on any franchisee. The only other scenario is that Jenny fooled them all. Similar to when someone is great at interviewing and lands the job, but then performs poorly… Many franchisors wrongly assume franchisees know about sales and marketing or ever that they actually have to (gasp) get out there and sell and not just hang up the ‘open’ sign… A lesson for us all… never assume a franchisee knows anything!

I can see and agree that the franchise company missed something in the selection of this candidate. Craig may very well be right and this particular franchise might be simply sniffing for franchise fees.

But, in my experience it is just as likely that they got a great interview. We have all had one or ten of these kinds of candidates. They feel they are on a job interview and they are really great at giving up the right information…

I urge the franchise consulting firms to truly come up with the right tools to “REALLY” profile their candidates. Many people simply are not, nor should they be at this time in their business development maturity franchisee’s…period! Not just with the wrong franchise…but at all! Find THAT out first and then make sure that the instruments you use don’t merely measure personality type or leadership type but those things that create the foundation for success internally within an individual or organization. This is no small task but… it is doable with all we know and all we can determine in the twenty-first century.

The franchisor didn’t either properly communicate what it takes or didn’t check in to see what the franchisee thought. This is often what happens when you have a franchisor who “sells franchises” rather than one who carefully screens and educates candidates. The franchisor apparently lacks one or more of three things.

One, a step-by-step recruitment process to educate candidate about the company and opportunity
Two, franchise salespeople who have not been effectively trained as recruiters
Three, poor departmental leadership. No one watching out for the franchisor’s candidates best interest.

This is a highly avoidable lose/lose situation.

I believe that the fundamental issue here is one of denial. The franchisor and the franchisee are both guilty of it.

While Fred Berni, founder of Dynamic Performance Systems, lays most of the blame on the franchisee’s lack of due diligence and poor judgement, he acknowldeges that franchisors sometimes fail to maintain high selection standards.  He writes:

Yes, the franchisor could have and should have done a better job of selecting. They should never have accepted Jenny as a franchisee. They could have avoided this right at the beginning by stressing the heavy marketing/sales responsibility during the first interview and suggested you talk to other franchisees about what they have to do on a daily basis…

In an ideal world, franchisors would live their words about “awarding” rather than selling franchises, but realistically, many franchise sales people are under a lot of pressure to lower their standards. Whether times are good or bad, many franchisors use a business model that depends on the franchise fee to meet operational expenses. Of course doing so is a very short-sighted approach to selection, but it meets today’s financial needs.

…Bottom line? In this case 90% Jenny’s fault and only 10% the franchisor’s fault.

As unfortunate as the situation is, most agree it was avoidable.  Flo Schell, founder of Franchise Coaching Systems, writes:

There is no question both franchisee and franchisor are suffering in this case, and needlessly so.

Long-term success in franchising is dependent on creating a win-win-win situations between the franchisor, the franchisees and the franchise service providers who serve both.  However, without due diligence and proper qualification prior to engagement, the franchise marriage is doomed to fail.  And like traditional matrimony, when one side fails, all sides fail.